If you don't already, you should follow @Edgar_Allan_Poe on Twitter.  Whomever is behind this icon's, well, icon, is an unknown but they know their Poe.  And they have a wicked sense of humor to boot.  Occasionally, this user will host an #askpoe forum, which is generally quite amusing.

I'm not going to lie -- my heart did a little flip when Poe (shh... don't remind me he's dead) answered one of my queries. 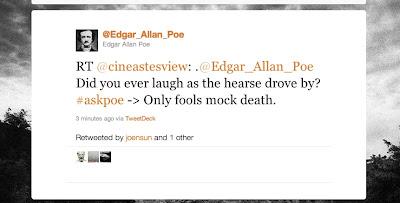