It was absolutely fascinating to look back and see where this whole Vampire obsession started.  And as with any original, I wanted to see how modern interpretations reflected their predecessors.  I was surprised at how very close and certainly recognizable many of the main characters were: Jonathan Harker, Van Helsing, Renfield and Lucy Westerna.  It was also a revelation to see just how little of the action takes place in Transylvania.  Although it certainly sets the mood with the vivid descriptions  mountain passes, castles, and frightened peasants at the outset of the novel, the bulk of it transpires in England. 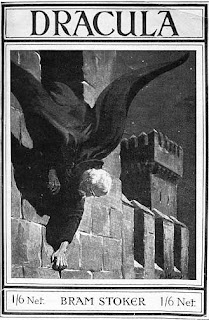 Rather unexpected too was the characterization of Count Dracula himself.  Though it seems easy to snicker at anyone introducing themselves as such, I had to remember that the name "Dracula" had absolutely no connotation to the readers of 1897.  It was just a foreign-sounding name.  Yes, he is hospitable to his solicitor, but he is hardly the charmer some films portray.  The women in the book are only susceptible to him when hypnotized and sleep-walking (Interestingly, Dr. Seward and Van Helsing have an exchange about hypnotism and Dr. Charcot -- the main focus of MEDICAL MUSES, which I reviewed recently).  Most striking, to me at least, was that this Count was not clean-shaven.  He wears a distinctive moustache  -- something not seen in Nosferatu (1922) or Bela Lugosi's Dracula (1931).


Furthermore, I was a bit stunned at how "trashy" some of the scenes were.  I'm used to the understated nature of Victorian literature, even when it is Gothic in style.  Stoker hides nothing in his graphic descriptions of decapitations, stabbings, and exsanguinations.  The author finds a very modern voice for his numerous characters -- the story is related through diary entries, telegrams, newspaper clippings, etc.  While each is distinct (Stoker even recreated dialects and accents), they all seem to be ahead of their time.  All are intelligent and none are useless.  In fact, Mina Harker  is very clearly one of the strongest characters throughout.  There are no whining teenagers here.
Yet the blatant violence, danger and social implications are raw.  It truly must have been shocking and yet alluring at its publication.  A great read during a summer thunderstorm...

My book photo uses a backdrop from Edward Gorey's Dracula play set (yes, I am a nerd).  Enjoy. 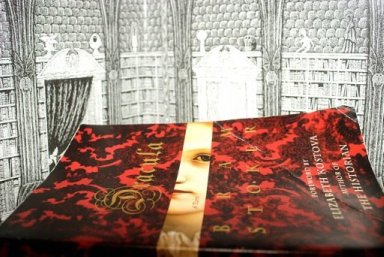