REVIEW: THE MAN IN THE ROCKEFELLER SUIT by Mark Seal 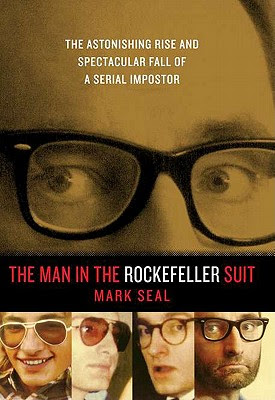 It's one of those things that happens to someone else.  We know it's real, but we all think we're smarter than those criminals, those bank robbers that hand the teller their ID during a robbery.  Criminals like that eventually fall victim to traps of their own making and can't be much for society to worry about.  In a sense we're right -- but survival of the fittest applies to criminals too.  The central character of this story manages to deceive some very smart, well-put-together people and convince them of the unbelievable. 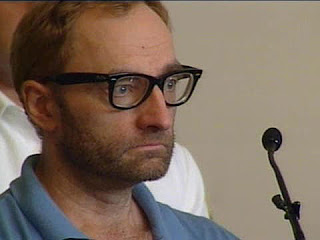 As an exchange student from Germany, Chris (later Clark) ingratiates himself with a family and is granted an extended green card.  From then on, he disappears into the fabric of America, transforming himself into whomever he needs (and wants) to be.  He is particularly manipulative with women, though not exclusively, and ends up as the toast of society in San Marino (a wealthy LA enclave), NYC, New England and Boston.  He built his worlds out of empty promises, then moved on and constructed another.
Mark Seal, contributing editor to Vanity Fair, traces this bizarre path with determination.  It's not easy tracking someone who doesn't want to be found, and it's even harder when they never really existed.  And while Seal's aim is of course to set down the facts as the happened (at least as best we know), there is also a more abstract reality he is trying to obtain -- exactly what is it about this person that made him so convincing?  So many people, many of them highly educated, were taken in.  People who should have known better.  His charm was so overwhelming that in some cases people even ignored the alarm bells in their head.
Seal's record includes numerous interviews with people duped by Rockefeller as well as various law enforcement agents to aided in his eventual capture.  Any opining is done through them and their quotes.  Perhaps this is what makes the book so compelling.  Seal manages to let the sensational story tell itself rather than sensationalize it.  One might also speculate that very tack is why so many people even agreed to be interviewed, when they had refused before.  Seal's delivery is straightforward, easy-to-follow but not at all dry.  While Rockefeller's position is uncertain, the reader can rely on Seal's presentation of the facts.
Read Mark Seal's article on Clark Rockefeller in Vanity Fair.
Read an interview with Clark Rockefeller in the Boston Globe.
___________________________________________
Many thanks to Lindsay at Viking/Penguin for the review copy.
ISBN 9780670022748 | 336 pages | 02 Jun 2011 | Viking Adult | 5.98 x 9.01in | 18 - AND UP
Posted by Eminence Grise at 8:00 AM
Labels: boston, clark rockefeller, imposter, mark seal, the man in the rockefeller suit, vanity fair