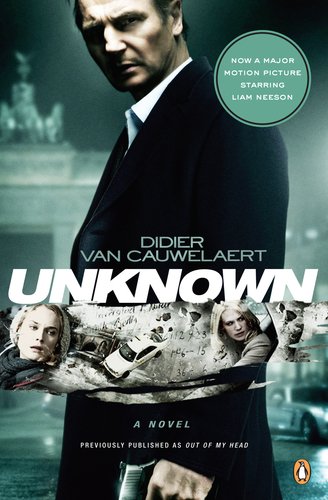 Without a number of artistic elements this would be nothing but a slapdash pulp action.  Fortunately, Van Cauwelaert brings pulp up several notches.   Plenty of action, a femme fatale and a sympathetic narrator make it pulpy.  But the writing is strong, confident and refined.
It's told from the first-person perspective of Martin Harris, famed botanist, awakes from a coma after a taxi accident.  According to the cab driver, he's been out for three days and she has been sitting with him, full of guilt.  She drives him home to his expensive flat, and they expect to never see each other again.  Harris is given a great shock, however, when he excitedly arrives at his front door, only to be met by someone else named Martin Harris and a wife who doesn't recognize him.  Angered and confused, he sets out to prove his identity and determine who is trying to erase him.
Because the story is told from Harris' point of view, we have of course a unreliable narrator, yet we believe him.  This is enhanced by a couple of things.  Firstly, Mark Polizzotti's translated preserves the lively cadence of the language, yet avoids flowery phrasing.  Secondly, the author mirrors the the style of writing with Harris' state of mind.  As he becomes more erratic, so does the narrative.  Settings jump around and conversations are truncated.  Thirdly, the details are rich but not overwhelming.  It was a small stroke of genius to make Harris a botanist rather than a retired cop or a physician.  His tangents into the world of botany are both cogent and humanizing. His observations become almost another character.
The reveal is not nearly as fulfilling as the rest of the novel.  Still it is a very enjoyable read.  It has been made into a film, slated to release in February of 2011.  It stars Liam Neeson, Diane Kruger, January Jones, Aidan Quinn and Frank Langella.  It certainly has a pacing like Taken that should be a perfectly watchable movie.  I am curious to see how they integrate Harris' inner thoughts, however.  It also seems the film was shot in Berlin, but the book takes place in Paris.  It is unclear where the film is supposed to be set at this point.  Following its release, a film review will be posted at http://acineastesview.blogspot.com.
________________
Many thanks to Meghan at Viking/Penguin for the review copy (movie tie-in edition).
In keeping with the theme of the book, it seems there is no listing for it on the Penguin/Viking site. ISBN - 9780143119012
Posted by Eminence Grise at 3:13 PM
Labels: book, didier van cauwelaert, liam neeson, Mark Polizzott, martin harris, out of my head, paris, penguin, unknown, viking